How to Quickly & Easily Remove Your Background in GIMP, by Color

Don’t you hate it when you have a photo that you love, but something about the background just isn’t right.

And you have a range of colors that are very similar, like this guy. So we have pinks and oranges up to whites and then white to blue. So the editing technique I’m going to share with you today is going to be easy to select these parts of the image in the background when you know how to use the tool properly.

And in this case, the tool I’m going to recommend for these types of images is your select by color tool, which is right here. The keyboard shortcut is shift plus, oh, now it’s real easy to use, but if you don’t understand that you have these tool options over here and know what they’re used for, then it can be kind of tricky to use this tool because it’s not going to give you the type of selection you want initially. So if I click right here, it’s going to make a selection, but it’s not really selecting all of the yellows in the background. Plus it’s also making a selection of her as well. And that’s based on the settings I have in my tool option. So let’s go over each one of these to figure out how to best use this particular tool. So I’m going to go ahead and de-select those here.

And then the last one is intersect with a current selection and I’ve never used that. So I’m not quite sure what it’s used for. I believe you can kind of cut through the selection that way and kind of remove from it. I’m not quite sure. So don’t take my word on that.

The two you’re going to use the most often are this option add to and subtract. Now, instead of coming over here in the tool options, you can use your keyboard shortcuts instead, which is shift to add and control to subtract from next, we have anti-aliasing, which is going to smooth the edge of your selection.

I recommend having that always turned on feather edges. It’s kind of like a brush. If you use a brush and GAM, you can set brushes edge to be a hard edge or a soft edge. If you set it to be a soft edge, then it will be feathered from hard to soft to the end of that brush. So the same concept with feathering, it’s either going to make it very tight or sharp. If you don’t have feather edges on, if you have feather edges on, it’s going to make it softer and kind of feather away from that edge. So typically I have feather edges turned off, or I have the radius very, very tight, like one to five pixels. Now that’s just based on experience and a depends on the image as well. So that’s something you’re going to have to play with to see what works best for your images.

Now the next option here is select transparent areas. And if you have transparency in your image already, then it’s going to add that as part of the selection. Typically I don’t. So I have that turned off next. We have sample merged. If you have multiple layers in your image, because you’ve worked on it and you’ve done some different types of editing, it’s going to sample all the layers for that color. Typically that’s not something I do. I’m just working on the layer where I want to remove that background from which is initially the beginning of the edit. So I typically have that turned off and then we have threshold. This is the one you’re going to set the most often. So what threshold does, is it increases or decreases the amount of your image that is being selected based on the tool you’re using in this case select by color.

We have another option here select by, and you can target specific color channels based on the color you want to select. So if you want the red or the green or the blue channel, you can select that. And then it will target those colors in that color channel. Typically, when I have draw mask turned on and I have a solid color like this, I don’t need to change the composite because when I click, it will show me in pink. The pink is actually an overlay showing the area of the image that is going to be selected. Now I still have my left mouse button held down. If I drag down, it’s going to increase the threshold. So now it changed to 17.6. If I scroll down again, you just want to do a little bit on your scrolling. It’s now down to 27.1 and it has a higher, or it’s actually selecting more colors for me.

Now, the higher that threshold is, and every time I scroll down, it will continue adding to that selection. The only problem though is if you go too far, as you can see it starting to select the yellow pixels in her skin, they may not be exactly yellow, but they’re a shade of yellow and it’s being added to the selection. So now I need to scroll up to remove from that selection and to reduce the colors that are being selected or the shades of yellow being selected. Once I get to a point where there’s nothing else being selected on the subject, I can go ahead and release my mouse and then those colors will be added as part of the selection. All right. I now need to add these darker shades of yellow to my selection as well. And to do that, I need to hold down which key that’s correct.

The shift key. So I’m gonna hold down shift, click once and hold my mouse button. And I get that pink overlay again. The mask. Now I can scroll down again to increase the threshold for those colors. Now I’m seeing it starting to select some colors on her neck. So I’m going to back off just a little bit. It’s added to it. Now I’m going to click in these little ants right here, these diagonal lines here that look like dancing ants. And I’m going to hold down that shift key again, click and add to the selection again, and just like that in three clicks, I was able to select the entire image. All I have to do now is click delete to delete the background. How cool is that? I love it now. I don’t recommend deleting the pixels like I just did because it’s going to do so permanently. If you save your file after removing your background like this and come back to it at a later time, you can get those pixels back. Instead, what I recommend doing is using a layer mask to temporarily hide those pixels, and then you can bring them back if needed to find out more about layer masks. Go ahead and check out this playlist right here. Thanks for watching and have an awesome day. 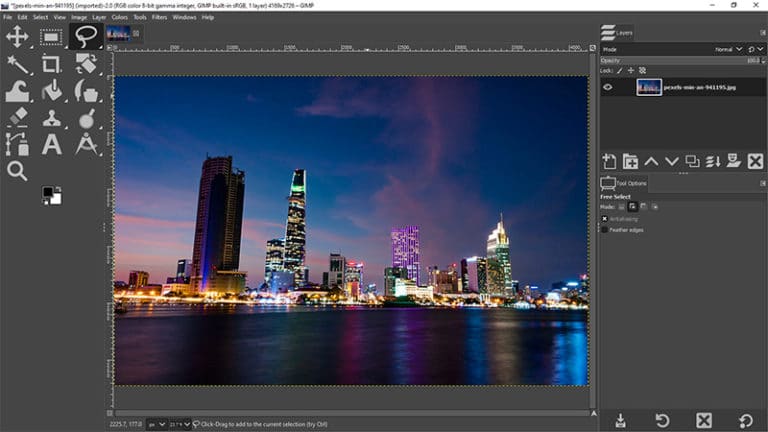 Open an image that requires editing. 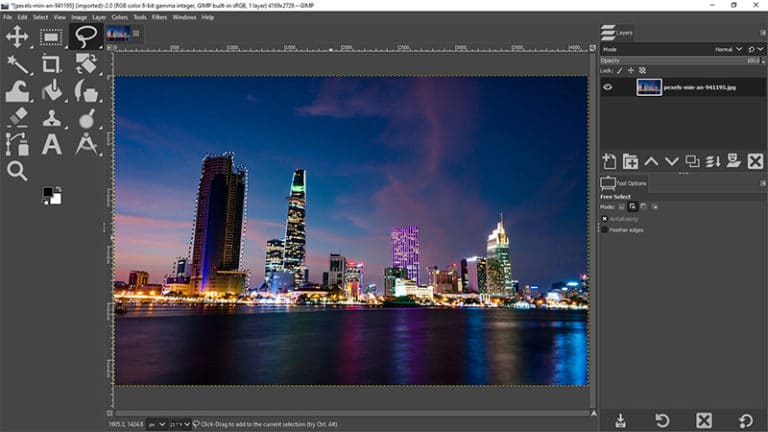 Choose and apply one of the selection tools to select an area that needs to be edited. 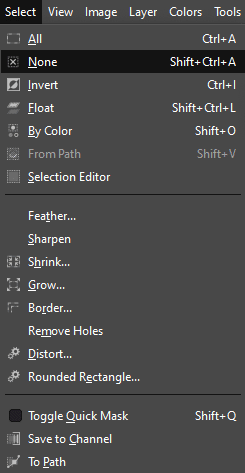 How To Deselect a Tool In GIMP 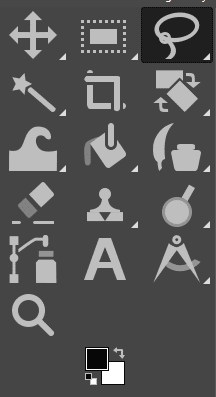 How To Deselect a Portion Of An Area 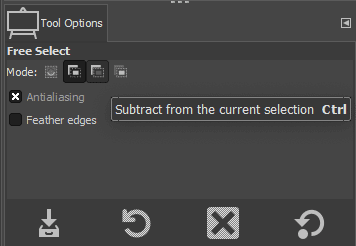 At the time of this writing, there seems to be a bug in GIMP. If you’re unable to deselect a portion or add to it like me, here’s how to fix it…

Go to the toolbox and select another tool. Any will do. Now, grab the selection tool you were using before and adjust the selection as needed.

You’ll now be able to deselect or add to your selection! If you need to further refine your selection repeat the process of choosing another tool.

How To Get Rid Of the Floating Selection In Gimp 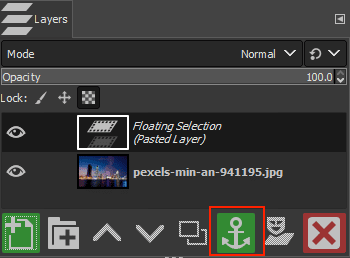 The floating selection occurs when you add what’s inside the selection to a new layer. Here’s how to get rid of the Floating Selection…

Now that you know how to deselect in GIMP it’s time to take your editing skills to the next level.

One: How to remove anything from GIMP

Two: One: How to whiten teeth in GIMP

Three: How to remove a background with GIMP 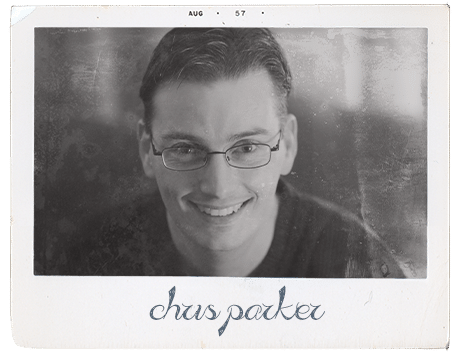 Hello! My name is Chris Parker and I run this place. But, more importantly, what’s in it for you? Well, my passion is to help you achieve your creative vision.

With 30 years experience I believe I can help you do just that. So, if you’re ready… let’s do it! 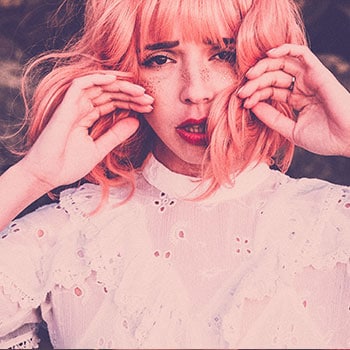 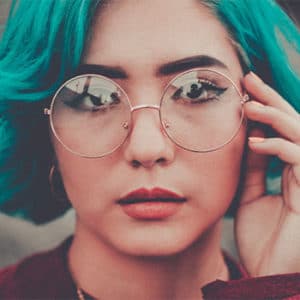 I hate spam. How ’bout you?

No worries. No spam.

Just awesome new content and product releases to your inbox each week.

How To Change Eye Color In GIMP {Solved} 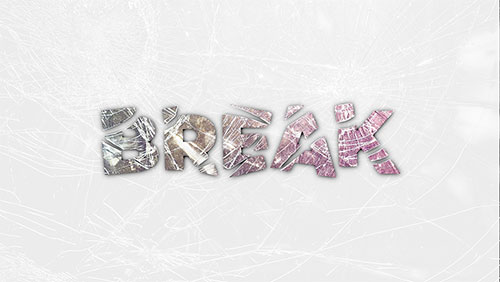 How To Use the GIMP Select by Color Tool for Selections 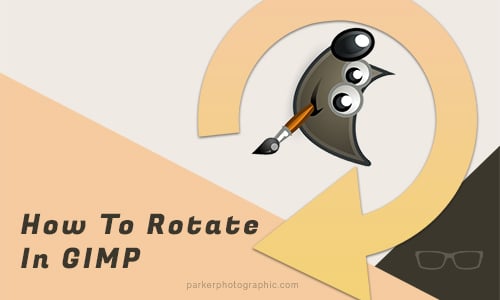 How To Rotate In GIMP {In-Depth Tool Guide} 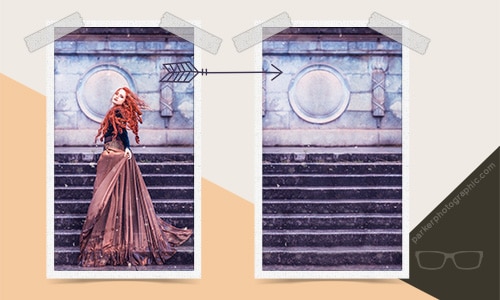 How To Remove Anything From Your Photo With GIMP

How To Use the Clone Tool in GIMP {Complete Guide} 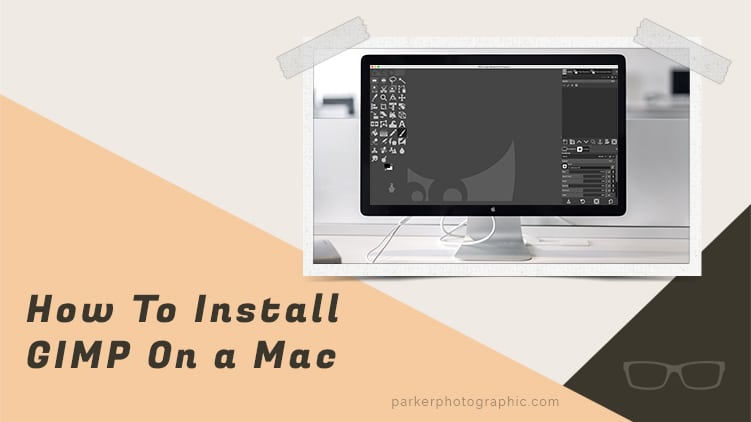 How To Install GIMP for Mac {Quickly + Easily} 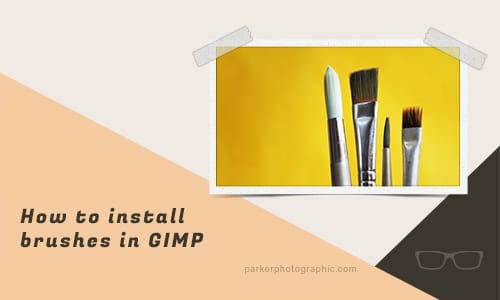 How To Install Brushes In GIMP